Quarantine Cooking For Foodies:
Make Your Own Pasta 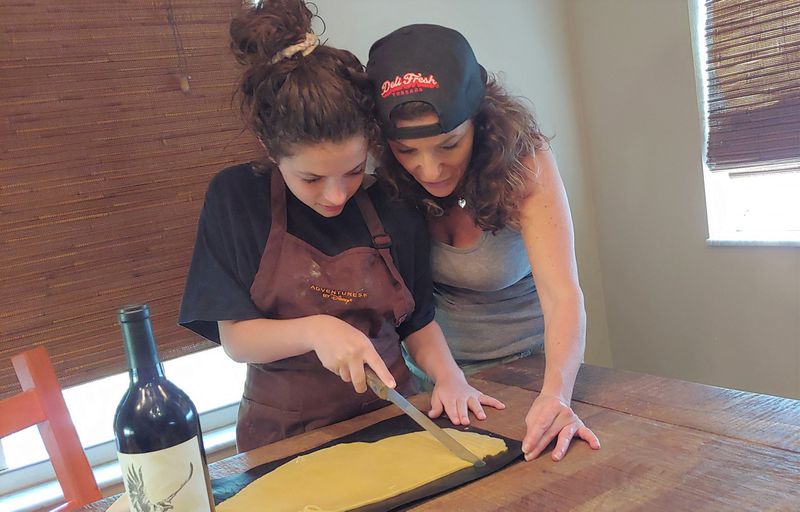 Making pasta is time-consuming, but offers an opportunity to practice the opposite of social distancing with family members. It’s nice.(Amy Drew Thompson / Orlando Sentinel)

The Dow has plunged. The theme parks have closed. The bars are shuttered. The movie theaters are dark. It’s the same in Italy, only there, the entire nation has been on mandatory lockdown for weeks. And yet, I see videos of jovial Italians singing in concert from their apartment windows like the Whos on Christmas morning, dancing up and down stairs in Tik Toks, leading exercise classes from rooftops — unshakable positive. It’s inspiring.

I can’t answer that with any authority whatsoever, but the foodie in me wants to jump to the only reasonable conclusion: It’s the pasta.

Carbs = love, after all. And math doesn’t lie.

So, as #socialdistancing makes the natural evolution from exciting, new hashtag to done-to-death meme (and we have more time on our hands than we did a week ago), let’s take a page from the Italians’ way of dealing with lockdown lemons and turn them into limoncello. Let’s make homemade pasta. 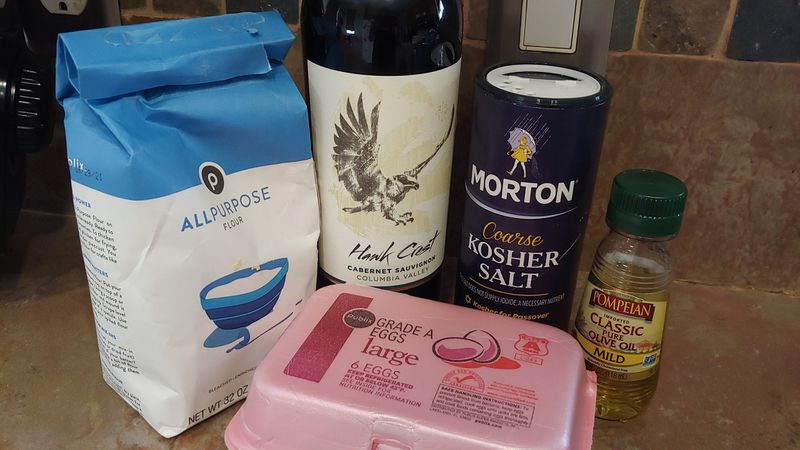 Odds are good you have the basic ingredients for pasta in your pantry. Simpler versions require nothing but flour and water.(Amy Drew Thompson / Orlando Sentinel)

This is a good time to expand your kitchen repertoire. Or dust off long-dormant culinary skills. It’s also a great time to get away from the Twittersphere or cable news, put on some music and connect with the other involuntary shut-ins in your household.

My kids were game.

“Pasta making is one of those things that’s easy to learn and impossible to master,” says Eliot Hillis, chef/owner of Orlando Meats, which has a house-made noodle dish on the menu more often than it doesn’t. (And by the way, they’re still open, offering online ordering, delivery and curbside pickup.).

“There’s no end to how refined your skills can be. Once you get to the point where you’re comfortable and you like your results, you’re probably going to want to make it better. Or more interesting.”

I just wanted mine to be edible. First-timers set the bar low. 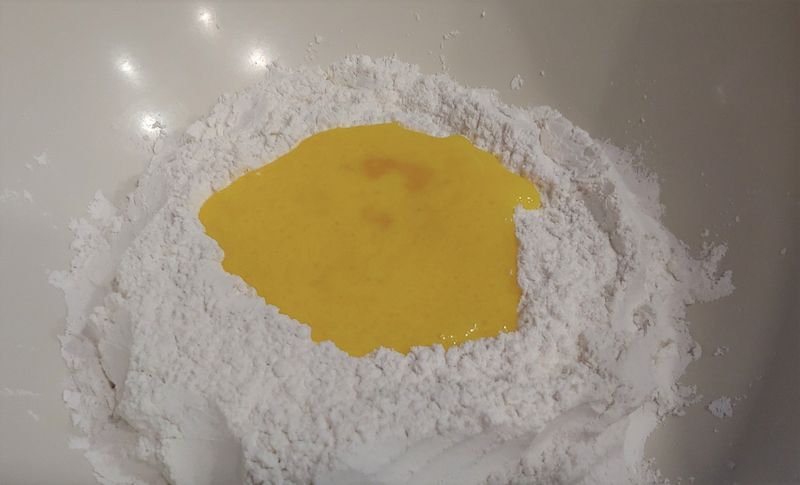 Create a well with your dry ingredients, then pour in the wet.(Amy Drew Thompson / Orlando Sentinel)

Making pasta sans appliances — why not do it like Nonna? — is physical. Kneading takes a half hour. More time for meaningful conversation while enjoying a light workout for your triceps, shoulders and chest.

“You have to build the gluten,” Hillis explains. It’s a process that requires a firm hand, yes, but hands you 30 minutes during which you can talk about that — or anything else in the world — with your kids, your roommate, your significant other, your mom…

If you’re alone, you can simply Zen out.

“It’s therapeutic…. You can turn your mind off and let it wander while your body does the work,” says Hillis, who taught a class a couple of years back. “People were surprised about how much physical labor is involved in the process.”

Once ready, the dough can be formed into a ball and should rest at least 30 minutes. An hour’s even better. Refrigeration isn’t necessary if you’re planning to cut and cook it right away. 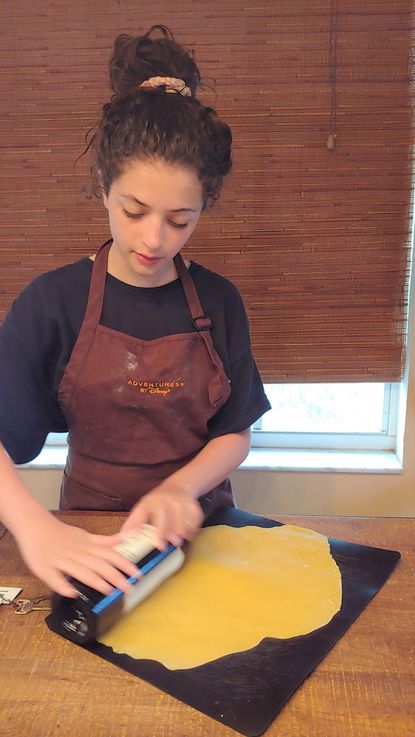 I went simple, choosing to roll it out and create my own brand of pappardelle, a ribbon-like pasta — like wide fettuccine. I had no rolling pin (I thought, anyway) and so took a tip from Hillis and used a wine bottle — a mandatory pandemic panacea in my house.

As it was midday on a Tuesday, I opted to leave the cork in, but you could just as easily decant. My boss is reading this, but I won’t tell yours.

Rolling, too, is physical. And I’m short. Leverage — like hand sanitizer — was scarce. The first batch was beautifully sliced, but tough — even after extra boiling — the ribbons turned stiff in the water. Decidedly un-noodly.

I moved to the table — it was lower than the counters — and magically found a real rolling pin (I still didn’t open the wine). Steadily, my youngest daughter and I made small batch after small batch, each rolled thinner and cut more delicately than the next. My oldest was happy to taste-test. Buttered noodles are never not a comfort food — even if they’re a little too toothy.

By the last batch, they were genuinely good. Not perfect, but the improvement from 1.0 was impressive. We’d made something like five bowls of pasta with one small batch of dough and this one was worthy of the toss I’d made ahead of time — an amalgam of sliced mushrooms, half a box of a tri-color cherry tomato medley, some leftover roasted broccoli and three cloves of fresh garlic — chopped — tossed in olive oil with a little salt, pepper and crushed red pepper flakes.

Speaking of salt, Hillis says to salt your pasta water like the sea for optimal flavor. 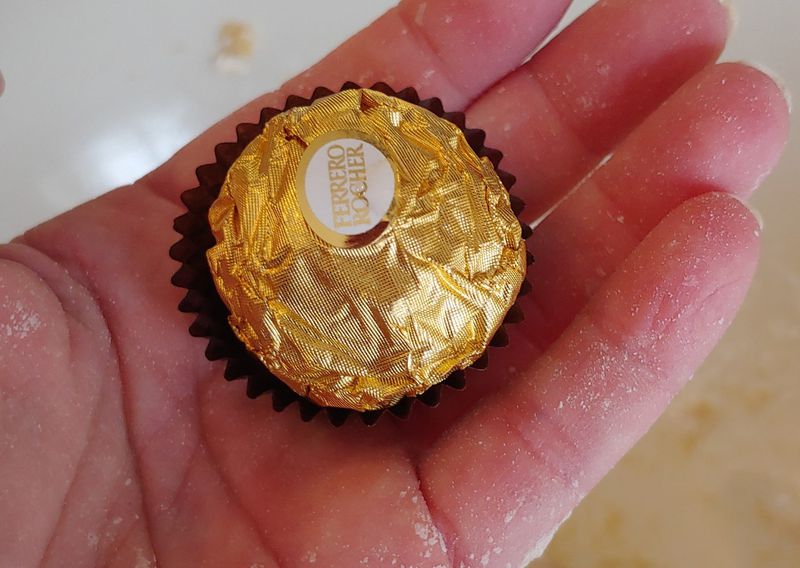 Lessons from lockdown: Breaks are fine amid the process. These can be made better with Italian chocolate. (Amy Drew Thompson / Orlando Sentinel)

That last bowl was powerfully good. And tasted better for all the effort — something the chef says isn’t uncommon.

Some of you suburban survivalists might have a Costco pallet of pasta in your garage. You’re thinking, “Why make it? I can buy it. Heck, I can probably even go grab the fresh kind via curbside delivery…”

Because appreciation. That’s why. 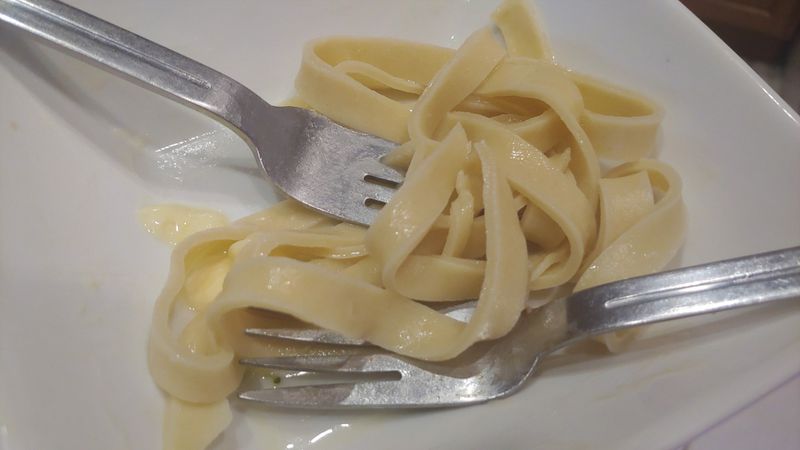 Our first attempts were way too thick, but we refined our skills with every batch.(Amy Drew Thompson / Orlando Sentinel)

“Even if you’re not taking the self-reliance route or the quality route,” Hillis says, “the appreciation for knowing the steps necessary to make something so seemingly simply, understanding what goes into it — is powerful.”

Making pasta isn’t quite butchering your own meat or making your own kimchi, but it’s a step toward food autonomy and understanding.

“Learning the depth of it helps you appreciate the thing so much more.” 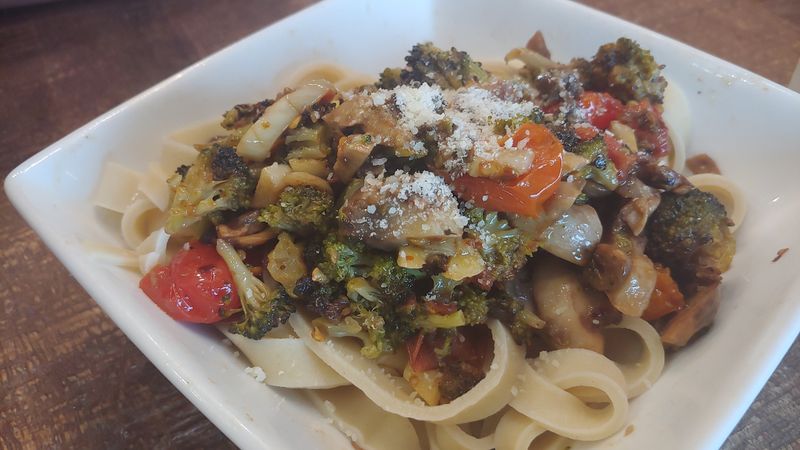 The end product was quite delicious with a homemade “Zen” toss, comprised of leftover broccoli and a couple of things we had in the fridge.(Amy Drew Thompson / Orlando Sentinel)

Give your mom or dad the best gift!

Everyone loves a thoughtful gift no matter when it’s given. Show your mom or dad how much you care with the gift of a Care Friend and the individualized care and attention they’ll provide. It’s a gift that keeps on giving and one that he or she deserves!

Set up your consultation!

We would love to talk you through our different care plans and how we can benefit both you and your elderly parent. Fill out the form below and one of our team members will call you as soon as they're able!