In A Time Of Distancing Due To Coronavirus, The Health Threat Of Loneliness Looms 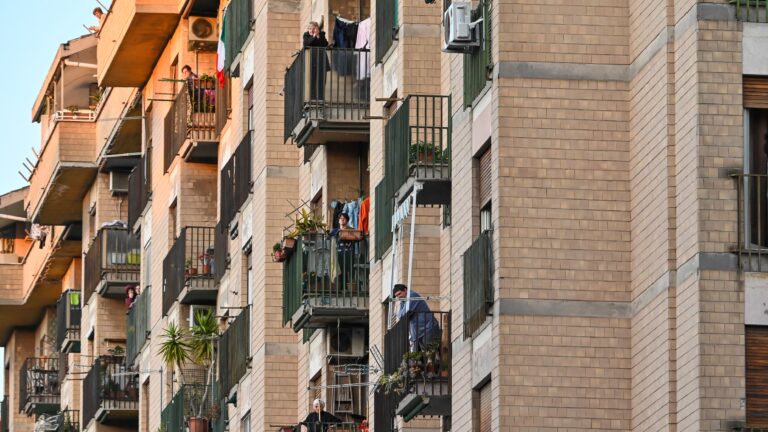 People in Italy “gather” on balconies at certain hours to play music, sing, or start a round of applause.
ANDREAS SOLARO/AFP VIA GETTY IMAGES

Dan Blazer and his wife were sheltering at home in North Carolina when their neighbors, a couple in their 50s, reached out by email last week to reassure the 76-year-old and his wife that they weren’t alone. Another couple phoned to check in.

“We’re older and we’re perfectly healthy and perfectly independent,” Blazer said. Still, he’s been a bit lonely of late, and appreciated the effort.

“Knowing these people are out there makes a huge difference,” he said.

Blazer is well-aware of the effects of loneliness and isolation — he’s spent years studying it as a psychiatrist and epidemiologist at Duke University. He chaired a committee convened by the National Academies of Sciences, Engineering, and Medicine that last month released a 281-page report on social isolation and loneliness in older adults. That report found that loneliness is tied to an increased risk of heart disease and stroke, dementia, high cholesterol, diabetes, and poor health in general. People who are lonely are also more likely to use alcohol and tobacco and exercise less.

Blazer agrees with the public health consensus — the best thing you can do for yourself and your community during the Covid-19 pandemic is to isolate yourself. But for some individuals, the side effects of doing so “could be disastrous,” Blazer said.

In its starkest sense, complete social isolation is used regularly by prisons as a severe punishment. But numerous studies show that even in everyday life, loneliness — the painful perception of not having meaningful connections with others — has serious health effects.

One of the earliest such studies was published in the American Journal of Epidemiology in 1979. Researchers followed nearly 7,000 people in Alameda County in California over a nine-year period and found that death rates were twice as high among people who lacked social and community ties, and that was after accounting for health, socioeconomic status, smoking, level of physical activity, and other factors that could affect lifespan.

A 2010 meta-analysis of 148 studies involving more than 300,000 Americans confirmed that finding: The lonelier someone is, the higher that person’s risk of death. Julianne Holt-Lunstad, a Brigham Young University psychologist and an author of that study, said loneliness can be as bad for your health as smoking 15 cigarettes a day.

But the loneliness that can result from deliberate self-isolation to protect oneself or others has not been well-studied.

“Psychologically, a key dimension of loneliness is that the person who feels lonely is feeling that way in contrast to a larger group,” said Jonathan Kanter, director of the Center for the Science of Social Connection at the University of Washington.

“What is happening now is different — we are all isolating simultaneously, and even feeling a sense of solidarity in it. We’re in a massive social experiment and we don’t know what extent this earlier research applies,” said Kanter.

“There are ways to stay connected even as we isolate ourselves from each other,” he said.

The research also isn’t clear on what the timeline of loneliness looks like — how soon it sets in, how it comes and goes, or at what point mental or physical effects start to take a toll. Still, researchers are concerned that if loneliness goes unaddressed during the pandemic, it will take its toll.

“We do know chronic levels are highly predictive of these outcomes,” said Holt-Lunstad.

When loneliness does strike, it could make people more susceptible to illness. In a 2003 study, researchers from the University of Pittsburgh asked 304 adult volunteers about their social activity, put them into hotel rooms, and then exposed the volunteers to a cold virus. Those with more social contacts were less likely to develop symptoms. One of those researchers also ran a study in which volunteers were exposed to a cold virus. Those who led more socially isolated lives reported more severe and persistent symptoms. And in another study, Ohio State University scientists found that the immune systems of socially isolated people were more likely to cause damaging inflammation when the people were deliberately stressed.

The evidence base for interventions to combat loneliness that could help those currently isolated is “less robust,” according to the NASEM report, largely because many studies have lacked control groups. There isn’t much research on how phone calls, video conferences, or social media platforms might compare to in-person conversations. For that matter, what about singing out the window, joining well-spaced dinosaur parades, playing Words with Friends, or even interacting with a robot programmed to chat with the elderly? Holt-Lunstad is working on a meta-analysis of medically designed interventions to combat loneliness in older adults.

Some studies have shown that excessive screen time can be harmful for young people, though those reports of harm are mostly related to the type of screen time or to interactions with strangers. The coronavirus pandemic has complicated that risk-benefit calculation, however.

“In normal times I’m really working hard to help people disconnect because I know the value of live interactions,” said Kanter, the University of Washington researcher. “Now I’ve pivoted because that’s not available.”

Kanter and other loneliness experts give thumbs up to video conferencing, chats, and calls with friends and loved ones, as well as virtual contacts with mental health workers. If needed, children can serve as their parents’ de facto IT department to help them get online.

“There’s clear evidence across a number of studies that older adults do well with being online if they see a utility to it,” said Linda Fried, dean of the Mailman School of Public Health at Columbia University and an author of the NASEM report.

Like other loneliness researchers, Kanter has been heartened by what he’s seen so far.

“The good news is people are doing this intuitively. They’re doing what people do when we’re deprived of social contact. I think that’s great,” he said.

Experts are encouraging the public to find new ways to feel connected. Join one of the local chat groups being formed by neighborhoods around the country, or start one yourself. Call someone every day. Sign up for an “unlonely” film club. Offer to help your neighbors — remotely — with their computers. There’s a real and documented benefit to keeping these connections going once everything settles down.

“[This situation] might be a trigger for increased awareness of how lonely anyone might be,” said Blazer, who chaired the NASEM committee. “And it might stimulate group efforts that perhaps have been on the back burner to try to reach out to people to prevent this problem.”

Give your mom or dad the best gift!

Everyone loves a thoughtful gift no matter when it’s given. Show your mom or dad how much you care with the gift of a Care Friend and the individualized care and attention they’ll provide. It’s a gift that keeps on giving and one that he or she deserves!

Set up your consultation!

We would love to talk you through our different care plans and how we can benefit both you and your elderly parent. Fill out the form below and one of our team members will call you as soon as they're able!